Are there alternative theories of physical reality?

This is one of those questions where the answers bring to mind Lord Byron's quote, "Truth is always strange, stranger than fiction." Especially the fiction portrayed as science in high school and college textbooks, passed down through generations of students, becoming dogma in everyone's belief systems.

Whether you accept any of the theories and interpretations presented in the books listed below, or for that matter, this entire website, I think we can all agree that the authors presented on this site, have not lost the faculty of critical thinking. It is thinking such as presented here, which has in the past, provided the impetus to change perceptions of reality, increase conscious evolution, and progress to new levels of awareness. If you don't look now you may miss watching long held up pillars of scientific and religious paradigms, dogmas and doctrines crumble to their destruction. Fortunately, this new wave of thinkers, unencumbered by the status quo and willing to say what they know their colleagues are thinking, but unwilling to admit, are the path makers of the future.

By reading these books, you are embarking on a new thought process and will open your mind to new ideas and theories. Some of them will be so different that they may sometimes seem impossible. But keep reading. You will find that your fantastic journey is just beginning and these authors are your tour guides. 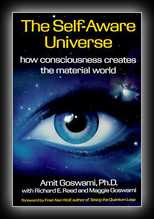 Consciousness, not matter, is the ground of all existence, declares University of Oregon physicist Goswami, echoing the mystic sages of his native India. He holds that the universe is self-aware, and that consciousness creates the physical world. 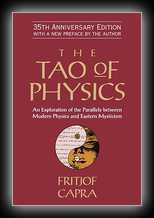 The TAO of Physics: An Exploration of the Parallels between Modern Physics and Eastern Mysticism
by Fritjof Capra

Here is the book that brought the mystical implications of subatomic physics to popular consciousness for the very first time—way back in 1975. This special edition celebrates the thirty-fifth anniversary of this early Shambhala best seller that has gone on to become a classic. It includes a new preface by the author, in which he reflects on the further discoveries and developments that have occurred in the years since the book’s original publication. “Physicists do not need mysticism,” Dr. Capra says, “and mystics do not need physics, but humanity needs both.” It’s a message of timeless importance.

With its unique combination of depth, clarity, and humor that has enchanted millions, this beloved classic by bestselling author Gary Zukav opens the fascinating world of quantum physics to readers with no mathematical or technical background.

"Wu Li" is the Chinese phrase for physics. It means "patterns of organic energy," but it also means "nonsense," "my way," "I clutch my ideas," and "enlightenment."

These captivating ideas frame Zukav's evocative exploration of quantum mechanics and relativity theory. Delightfully easy to read, The Dancing Wu Li Masters illuminates the compelling powers at the core of all we know. 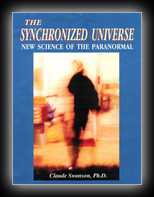 The Synchronized Universe: New Science of the Paranormal
by Claude Swanson

Excerpt from back cover:

Modern physics has suppressed and ignored the paranormal, but in the laboratory paranormal phenomena are now a proven fact and are beginning to shake the very foundation of physics. The new scientific revolution is changing our understanding of the universe and of ourselves.

"The Synchronized Universe is a well written and exciting presentation of the latest scientific evidence proving the existence of the paranormal. Swanson's suggestions about how present physics  can be modified to understand and explain some of these strange phenomena may go a long way to healing the ancient split between science and spirituality. The implications of this book are far-reaching." - Brad Steiger, best selling author, Mysteries of Space and Time