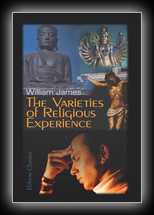 The Varieties of Religious Experience
by William James
1958

The culmination of William James' interest in the psychology of religion, The Varieties of Religious Experience approached the study of religious phenomena in a new way -- through pragmatism and experimental psychology. The most important effect of the publication of the Varieties was to shift the emphasis in this field of study from the dogmas and external forms of religion to the unique mental states associated with it. Explaining the book's intentions in a letter to a friend, James stated:

"The problem I have set myself is a hard one: first, to defend...'experience' against 'philosophy' as being the real backbone of the world's religious life...and second, to make the hearer or reader believe what I myself invincibly do believe, that, although all the special manifestations of religion may have been absurd (I mean its creeds and theories), yet the life of it as a whole is mankind's most important function."

Drawing evidence from his own experience and from such diverse thinkers as Voltaire, Whitman, Emerson, Luther, Tolstoy, John Bunyan, and Jonathan Edwards, The Varieties of Religious Experience remains one of the most influential books ever written on the psychology of religion.