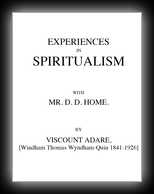 Experiences in Spiritualism with D.D. Home
by Viscount Adare
1869

Experiences in Spiritualism with D. D. Home by Viscount Adare was printed privately in 1869 at the request of Adare's father, the Earl of Dunraven. In order to make this remarkably rare book available to the public and in memory of his father to whose title he succeeded; In 1925 Adare agreed to the publication of a second edition with the Society of Psychical Research. The probable reason for the privacy of the first publication was that the Earl of Dunraven, being a Roman Catholic, disliked incurring the censure of the Church.

The friendship of Lord Adare and D. D. Home dates from 1867. It began at Malvern in Dr. Gully's hydropathic establishment where Home was a guest and Lord Adare a patient. Gully's patients included Charles Darwin and Alfred Tennyson. For two years Adare he spent a great deal of time in Home's company. His friendship for Home - as stated in his preface to the 1925 publication - never diminished or changed thereafter. But having thoroughly satisfied himself that the facts were not due to trickery or fraud he abandoned psychical research, as the phenomena, which were physically very exhausting to him, showed little progress and the study of occult forces was not congenial to him, having other plans and ambitions for his life; moreover, he grew afraid lest absorption in the subject weakened his self-dependence and the necessity of submitting everything to reason.

Adare recorded 78 séances and they are presented here. The phenomena recorded in the book are of a very wide range and embrace almost every spiritualistic manifestation. No scientific attempt was made to explain what was happening during the séances and miracles may well have been acceptable to Lord Adare's Catholicism and to his fellow-sitters. On the other, the records give the impression of conscientiousness. In the form of letters addressed to the Earl of Dunraven they were drawn up shortly after the séances. An important point is that Lord Adare, for almost two years, lived most of the time with Home. This alone should eliminate the possibility of deception on a large scale. The preface definitely states:

"We have not, on a single occasion, during the whole series of séances seen any indication of contrivance on the part of the medium for producing or facilitating the manifestations which have taken place."
The nature of the phenomena, too, in most cases, was such as to exclude every supposition of fraudulent production. One cannot shake a whole room, vibrate a table, generate wind, phantom hands, transparent apparitions, music without instruments or levitation of one's own body without paraphernalia of sleight-of-hand and a stage to produce the optical illusions. If no other records were available concerning the phenomena of D. D. Home, Lord Adare's book alone would establish a prima facie case for the genuine and unusual powers of this famous Medium.