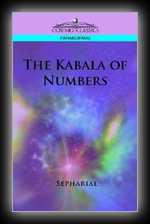 The Kabala of Numbers
by Sepharial
1920

There is a system of interpretation in numerology which is supported by experience, but has its origin beyond the realm of the phenomenal worlds. If no such system existed, it would be impossible to prove the geometrical relations of thought. But this is done daily by those who make use of numbers for purposes of divination. -from "Chapter II: Geometrical Relations of Thought" Originally published in two volumes in 1913, this classic of the art of numerology builds upon the work of the ancient Greeks, Aryans, and Egyptians to describe the dramatic effect that numbers exert upon the world all around us. Part I introduces numerological theories and practices, including how to read others' thoughts through numbers, predict and influence success and failure, and understand "chance" events. Part II explores the geometry of nature and how it affects us, numbers that sway human will, and much more. For practitioners of the paranormal arts and those interested in the history of science and pseudoscience, this is a fascinating and essential book. "Sepharial" was the pseudonym of British mystic WALTER GORN-OLD (1864-1929), one of the most prolific writers on and teachers of astrology in modern times. Among his many works are Astrology Explained, Cosmic Symbolism, Science of Foreknowledge, and The Silver Key.