Are there any Christian mediums?

George Anderson and John Edward are two of the greatest mediums living today. Each discusses directly in their books how they have continued their Christian beliefs in lieu of their ability to speak with spirits, which is generally frowned upon in Christian dogma. We decided to include Edgar Cayce, who through channeling, produced some of the most amazing information ever obtained by one individual, and remained an extremely devout Christian throughout his lifetime. Also the information relayed within Anthony Borgia's works came through from an Anglican monsignor and so is pertinent to this question.

Now you might ask, why did we single out Christianity out of all of the other organized institutionalized religions? Well, this is our response to the enumerable email messages we've received from Christians, more than from all other religions combined, in relation to the information presented on our associate site, AfterLifeData.com. Many Christians, after reading about the afterlife on that site, have a difficult time understanding how the information fits in with what they have been taught. This is understandable given the paucity of afterlife details within the Christian bible, dogma and doctrine.

We hope it will be helpful to you knowing that Anderson, Edward, and Cayce reconciled the information they received through "other" sources with their Christian upbringing. Borgia's works (there are more than the two listed here), where a Christian minister reports back from the afterlife realms, may also help in any resolving your questions. 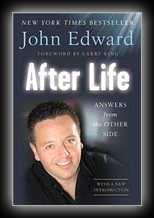 After Life: Answers from the Other Side
by John Edward

What happens after we die?

The acclaimed medium takes his talents to new levels and new countries! For After Life, John and a documentary crew traveled to Australia and across the United States, where he demonstrated once again that grief, healing, and hope are eternally intertwined. He answers his fans' most-asked questions about the mediumship process and how it works, while revealing his own personal life as a husband and new father. Edward also shares what he’s learned through his own personal losses and demonstrates that it’s never too late to forgive…and never too far away to love.

John also connects with celebrities both here and on the other side. 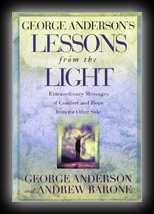 For 27 years, George Anderson, widely considered the world's greatest living medium, has listened to those on the other side, gaining a unique awareness of what those souls want his millions of believers to know, to understand, and to accept.

Anderson offers a vivid and intimate account of his spiritual communications. He defines all that he has experienced and directly answers the many questions most commonly asked about the ultimate path to the Infinite Light. They are messages that not only enlighten us about what awaits, but also teach us how to fulfill our significant roles here on earth and in life.

Unto the Churches - Jesus Christ, Christianity and the Edgar Cayce Readings
by Richard H. Drummond, Ph.D.