Is there judgment in the afterlife?

There is a very simple answer to this question – NO! If you were brought up to believe all those religious polemics about original sin, hell, hellfire & damnation, satan, devils & demons, eternal fire, etc., do yourself a huge favor and toss them away! They are nothing but tall tales. There is absolutely no evidence from any of the substantial afterlife information presented on this site or any information obtained via channels, mediums, astral projection, NDE's etc. that supports these fear-producing ideas. While there are dark areas in the afterlife, they are only entered by those whose vibratory rate matches that area. The good news is that they are not permanent, and any one can leave by increasing their vibrations and heading to the Light. Plus there is plenty of help available as well.

As described by Monsignor Benson (son of Edward White Benson, former Archbishop of Canterbury), "The whole crude conception of being damned for all eternity arises from a totally wrong conception of the Father of the Universe, a grotesque conception that has found its supporters throughout the centuries, and that has, in consequence, put fear into the hearts of mankind. It is a man-made belief without the slightest foundation in fact. And it is not long before a newcomer to the spirit world finds out that the whole idea of eternal damnation is an utterly impossible one. They see at once that the whole spirit world lies before them in equal right with their fellow human beings, and that the God of whom they were always rather frightened when on earth is a Father of unlimited and illimitable benevolence, and One, moreover, who could never breathe vengeance upon any one of His children. That in itself is an illuminating discovery which is of great service to the newcomer to spirit lands, since it at once opens his mind to the truth." (Here and Hereafter, Anthony Borgia, 1959) 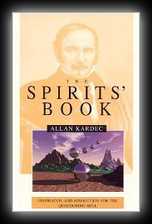 The Spirits' Book is a work at the center of a way of life based on the evolution of the human spirit. It endorses the Christ as the supreme model for human conduct and thought, and stresses the need for inner transformation and self-knowledge as avenues to fulfillment and personal realization on earth. 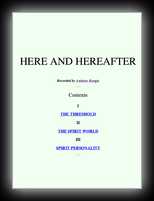 Here and Hereafter
by Anthony Borgia

From the Introduction:...Would it not be a relief to many minds, then, if they knew something, even if only a little, about the possible or probable state of their being after they have made the change from this life to the next? In other words, what sort of place is the next world? The only way to find out is to ask someone who lives there, and to record what is said. And the latter is precisely what has been done in this present volume...[afterlife communication from Monsignor Robert Hugh Benson] 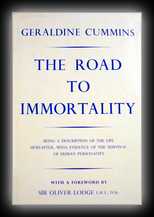 The Road to Immortality - Description of the After-life Communicated by the late F.W.H. Myers
by Geraldine Cummins