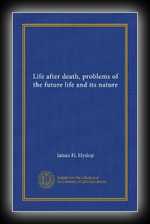 Two chapters and a part of a third are reproductions of previously published matter, and they are incorporated because they are so relevant to the main object of the work. But the rest of it has been suggested by the need of discussing some problems which are sequels of the scientific collection of facts with which psychic research has so long occupied itself in the effort to ascertain whether man survived bodily death or not.

I have not taken the pains in this work to quote the facts which tend to prove such a claim. The material is too plentiful and voluminous, as well as complex, to take the space for it. The publications of the various Societies for Psychical Research supply the evidence in such quantity and quality that it would require a volume by itself to quote and explain its importance.

I assume here sufficient intelligence on the part of most people who have done critical reading to see the cogency of it and to accept the proof of survival in it, though there are associated problems not so well secured against difficulty. The trouble with most people is that, in estimating the evidence, they take with them certain preconceived ideas of what a spirit is and so adjudge the evidence accordingly. The scientific man, however, assumes nothing about a spirit except that it is a stream of consciousness existing apart from the physical body. How it may exist, he does not inquire, until he is convinced that there is evidence of the fact of it, and then a large number of associated problems arise.