What is Electronic Voice Phenomena (EVP)?

Electronic Voice Phenomena (EVP), also known as Instrumental Transcommunication (ITC), is where communication with deceased entities occurs via electronic media such as radio, tv, telephone, or computer. A number of researchers have furthered the pioneering work of Jurgenson and Raudive. If this sounds amazing to you, it should, because it is. And why shouldn't those in the afterlife, wishing to communicate, not take advantage of earthly communication technology? 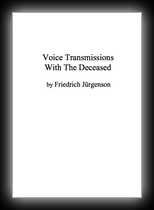 Voice Transmissions With The Deceased
by Friedrich Jurgenson

After Jürgenson’s book there have been a whole series of valuable publications (Dr. Konstantin Raudive, The Inaudible becomes Audible and Do We Survive Death?; Minister Leo Schmid, When the Dead Talk; Hildegard Schaefer, Voices from Another World), but it was his book that opened the door for the first time. Since then we can listen to a world that up until now was closed off from us. His book has historical significance. Without exaggeration, his discovery can be compared with that of Columbus. Both have researched a new world and both discoveries had consequently unforeseeable effects on our lives. 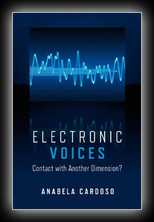 Electronic Voices: Contact with Another Dimension?
by Anabela Cardoso

This is the story of a normal woman who experienced the impossible — objective contacts with another dimension through loud and clear voices received by electronic means during Instrumental Transcommunication (ITC) experiments. Dr Cardoso, a senior diplomat, describes the astounding experiences that transformed her life since she started ITC research in 1997. She presents extracts of conversations with her deceased loved ones and other personalities who insisted that they live in another world. The level of agreement between communications received by the author and concepts, even words, recorded by other experimenters from Jergenson and Raudive to contemporary operators, constitutes compelling evidence of the reality of the next world that awaits us all. As communicators from Timestream told Dr Cardoso: The dead pass through here, you pass through here. Electronic Voices breaks new ground in the literature. 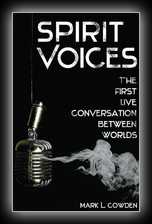 Mark L. Cowden is the audio-visual technician who recorded what is believed to be the first ever documented case of a live, two-way conversation with the spirit world. In early 2010, at an apparently haunted hotel in Northern Ireland, Mark was part of a small team of people who were filming a television documentary series about ghost stories when something incredible happened. While a medium and a psychic investigator sat on a bed in the next room and attempted to contact the spirit of a ghost in the hotel, Mark was able to record not only the medium's side of the conversation, and her report of the responses she was receiving from the spirit, but the spirit's replies directly as well! With camera's rolling, an independent television crew documented the whole process. Not only is this believed to be the first time anybody has ever managed to record a whole conversation between this world and the next, it was also a first for television. Spirit Voices documents Mark's work in the field of paranormal forensics and details the technology and methods he developed to achieve such groundbreaking results.