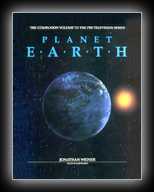 This outsize volume is slated to appear as its companion PBS series is aired. A superb pop-science writer and a columnist in Sciences, Weiner seems to have steeped himself in the lore, legends and most up-to-date scientific knowledge about our planet.

His book teems with little-known and often startling facts about Earth's origins, its geology, its climate, its relationship to its cosmic environment, its dependence on a sun which itself is burning out, and finally its unique character as the abode of an incredible variety of living species, including humans, whose existence shapes its destiny.

A profusion of photos lends the book visual exhilaration; color shots as recent as a Space Shuttle photos of hurricane Elena are included. Here, explored profoundly and comprehensively, is Mother Earth seen as unbearably preciousthe more so since Weiner does not discount chances of a possible "nuclear winter," naming his readers as "the first generation of the long goodbye."