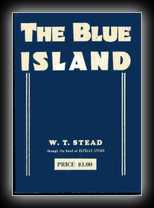 The Blue Island - Experiences of a New Arrival Beyond the Veil
by W.T. Stead
1922

The Blue Island is an account of the adventures of a new arrival beyond the veil. It is the communication from W.T. Stead, noted English journalist and Spiritualist, as relayed through psychic Pardoe Woodman to Stead's daughter, Estelle, in the Crew circle in England.

When in April 1912 the Titanic sank in mid-ocean and my father passed on to the next world, I was on tour with my own Shakespearean Company. Amongst the members of that Company was a young man named Pardoe Woodman, who on the very Sunday of the disaster foretold it as we sat talking after tea. He did not name the boat or my father, but he got so much that pointed to disaster at sea and the passing on of an elderly man intimately connected with me, that when the sad news came through we realized he must have been closely in touch with what was about to happen. I mention this incident because it formed the first link between my father and Mr. Woodman, and as it is largely due to Mr. Woodman's psychic powers that my father has been able to get through the messages which are contained in this book, I think, therefore, it will be of interest to readers and should be put on record.

A fortnight after the disaster I saw my father's face and heard his voice just as distinctly as I heard I it when he bade me good-bye before embarking on the Titanic. This was at a sitting with Etta Wriedt, the well-known American direct voice medium. At this sitting, I talked with my father for over twenty minutes. This may seem an amazing assertion to many, but it is a fact vouched for by all those who were present at the sitting. I put it on record at the time in an article published in Nash's Magazine, which included the signed testimonies of all those present.

From that day to this I have been in constant touch with my father. I have had many talks with him and communications from him containing very definite proof of his continued presence amongst us. I can truly say that the link between us is even stronger to-day than in 1912, when he threw off his physical body and passed on the to spirit world. There has never been a feeling of parting, although at first the absence of his physical presence was naturally a source of very great sadness.

In 1917, Mr. Woodman was invalided out of the Army and came to stay with us at our country cottage at Cobham. Whilst with us, the news came to him that his great friend had been killed at the front, and his interest in the possibility of communication with the next world, which had been indifferent till then, became intense, and he set out to find out for himself. It is ever the passing of a loved one that gives the necessary stimulus for eager inquiry.

It was not long before his friend was able to give him definite proofs of his continued existence and of his ability to communicate. His first proofs were given through Vout Peters, and were given through Vout Peters, and were followed by others through Gladys Osborne Leonard's mediumship and through the mediumship of friends gifted with psychic powers. I was present at that first sitting with Mr. Peters; father was there also, and his friend said it was due to my father's presence and help that he was able to succeed so well in these first attempts at communication. Shortly after this, Mr. Woodman found that he himself had the power of automatic writing, and father and others were soon able to write through him. Father always prefers me to be present, as if I am not he seems to have more difficulty, and very rarely will attempt writing. He explains the necessity of my presence in this way: he and I are so much en rapport, and so closely in touch with each other, that he is able to draw much power from me; I act as the connecting link and form a sort of battery between him and Mr. Woodman. I merely sit passively by whilst Mr. Woodman Writes. Certainly I see a light around us, and a strong ray of light concentrating on Mr. Woodman's arm. Sometimes I am able to see father himself, and always, when he is writing, I feel his presence very distinctly.