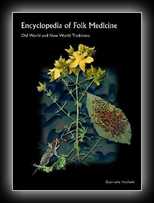 Informative and engaging, yet authoritative and well researched, Encyclopedia of Folk Medicine reveals previously unexamined connections between folk medicine practices on either side of the Atlantic, as well as within different cultures (Celtic, Native American, etc.) in the United Kingdom and America. For students, school and public libraries, folklorists, anthropologists, or anyone interested in the history of medicine, it offers a unique way to explore the fascinating crossroads where social history, folk culture, and medical science meet.

From the 17th century to the present, the encyclopedia covers remedies from animal, vegetable, and mineral sources, as well as practices combining natural materia medica with rituals. Its over 200 alphabetically organized, fully cross-referenced entries allow readers to look up information both by ailment and by healing agent. Entries present both British and North American traditions side by side for easy comparison and identify the surprising number of overlaps between folk and scientific medicine.