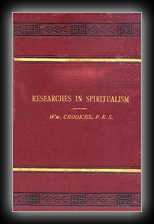 Researches in the Phenomena of Spiritualism
by William Crookes, FRS
1926

Published in 1874, this collection of reports by chemist and scientific journalist William Crookes describes his controversial research into psychic forces. Crookes outlines his experiments upon the phenomena of spiritualism from 1870 to 1874, including his testing of famous mediums such as D. D. Home, Kate Fox and Florence Cook.

Some weeks ago the fact that I was engaged in investigating Spiritualism, so called, was announced in a contemporary: and in consequence of the many communications I have since received, I think it desirable to say a little concerning the investigation, which I have commenced. Views or opinions I cannot be said to possess on a subject which I do not pretend to understand. I consider it the duty of scientific men who have learnt exact modes of working, to examine phenomena which attract the attention of the public, in order to confirm their genuineness, or to explain, if possible, the delusions of the honest and to expose the tricks of deceivers. But I think it a pity that any public announcement of a mans investigation should be made until he has shown himself willing to speak out.

A man may be a true scientific man, and yet agree with Professor De Morgan, when he says – "I have both seen and heard, in a manner which would make unbelief impossible, things called spiritual, which cannot be taken by a rational being to be capable of explanation by imposture, coincidence, or mistake. So far I feel the ground firm under me; but when it comes to what is the cause of these phenomena, I find I cannot adopt any explanation which has yet been suggested. …The physical explanations which I have seen are easy, but miserably insufficient. The spiritual hypothesis is sufficient, but ponderously difficult."

Regarding the sufficiency of the explanation, I am not able to speak. That certain physical phenomena, such as the movement of material substances, and the production of sounds resembling electric discharges, occur under circumstances in which they cannot be explained by any physical law at present known, is a fact of which I am as certain as I am of the most elementary fact in chemistry.