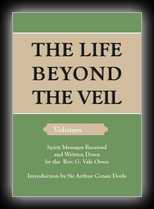 The Life Beyond the Veil Book 3 - The Ministry of Heaven
by Rev. George Vale Owen
1921

ALTHOUGH during the year 1920 the whole of the messages contained in this volume appeared in the Weekly Dispatch, their strict continuity was not observed for various editorial reasons. These thirty-nine communi- cations are now, however, set forth in consecutive order and in the manner in which they were received by the Rev. G. Vale Owen, Commencing with the message from Kathleen on the evening of September 8th, 1917. These messages were all recorded in the Vestry of All Hallows, Orford, and Mr. Vale Owen invariably sat between the hours of 5 and 6.30 in the evening.

I have personally compared the proofs of this volume, word for word, with the original manuscripts. In no instance has a word been altered or a passage omitted. The original script was written down by the Vicar in pencil in the manner described by me in Volumes I and II of this series.

In the Note by Mr. Vale Owen on page 6 he describes how in September, 1917, he was called to sit again, after a lapse of over three years and nine months, by messages spelt out by the planchette operated by his wife.

I have had the privilege of examining the records of these planchette messages. I found that week by week for practically the whole of a period of three years and more, the Vicar had kept in touch, by this means, with Kathleen and also many friends and members of his family who are Beyond the Veil.

WHERE spaces spread their acres broad
Stands many a mighty Angel Lord,
With ear attent to catch the tone
Of whispers wafted from the Throne.
They weave them into light and shade,
And lo, a Universe is made.

Anon a Voice, "Lords Delegate
Of My Omnipotence, Create!"
Unmoved, yet moving everything,
Like golden rain their thoughts they fling.
The cosmos stirs uneasily,
And sentient Life begins to be.

Diverse and lovely, at their urge,
A myriad living forms emerge,
As they on bird and beast and tree
Impress their personality; while
He from Whom all things began
Becomes articulate in Man.

Then speaks the Eternal Sentinel,
"We have done all things very well.
It is enough. These sons of Mine
Shall know their origin divine,
Assume their heavenly dignity
And lead Creation back to me."

Subsequent to the reception of the portion of the Script, which is included in this volume, I received the verses printed above as the keynote of the general theme.