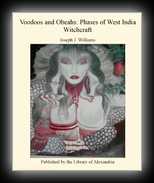 "This companion book to Psychic Phenomena of Jamaica goes into much greater depth as to the New World-African connection, and adds more material about Afro-Carribean religion in Haiti. The primary strength of this work is the careful documentation of the history and ethnography of Vodun. Williams includes numerous quotes from rare documents and books on the subject. The weakness is the lack of detailed information about the religious system of Vodun, which we now know to be as complicated (or more so) than any of the major religions. There is scarcely any mention of the loas, the pantheon of Vodun Gods and Goddesses, and he misses the importance of possession during the religious ceremonies. However, all things considered, this is required reading if you want to understand the background of Haitian and Jamaican Vodun, and the profound influence of imperialism, slavery and racism on its development.--jbh." (Quote from sacred-texts.com)

Voodoo (Also spelled Vodoun, Voudou, Vodun and several other variants) is a syncretic religion combining Roman Catholicism and native African religion, particularly the religion of the Dahomey region of Africa (the modern day nation of Benin).

The name was derived from the god Vodun of the West African Yoruba people who lived in 18th and 19th century Dahomey. Its roots may go back 6,000 years in Africa. That country occupied parts of today's Togo, Benin and Nigeria. Slaves brought their religion with them when they were forcibly shipped to Haiti and other islands in the West Indies.