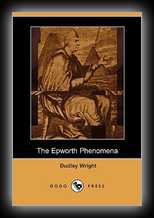 The Epworth Phenomena
by Dudley Wright
1917

It is fairly certain that Galileo never said, "It moves, for all that," and that Wellington never said, "Up, Guards, and at 'em!" And one humorous writer has proved that Napoleon never existed, so perhaps Waterloo was never fought, and no enemy there for the Guards to be up and at. History, in short, is an uncertain affair. It depends on fallible human testimony; and though most of us are agreed on the principal points, even these cannot be coercively proved, and from them there spreads a region of ever-increasing dimness, where many things are lost, all outlines are indistinct, and illusions and false perspectives abound. Who was the Man in the Iron Mask? Was William Rufus murdered, or killed accidentally? Did Branwell Bronte make love to his employer's wife? Did D. D. Home really float out of one window and in at another? We do not know. How then shall we expect to know exactly what happened in the parental home of John Wesley two hundred years ago, or the exact details of ghost stories and the like that were told him on his travels? No certainty is attainable. Each must judge for himself-or must suspend judgment-and the verdict will depend partly on the evidence, partly on our knowledge or ignorance of similar cases, and partly on our emotional bias if we have any. Anyhow, as John Wesley quaintly says, no great harm will be done "provided those who believe and those who disbelieve…have but patience with each other."