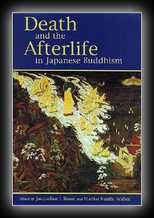 Death and the Afterlife in Japanese Buddhism
by Jacqueliine I. Stone, Mariko Namba Walter
2009

For more than a thousand years, Buddhism has dominated Japanese death rituals and concepts of the afterlife. The nine essays in this volume, ranging chronologically from the tenth century to the present, bring to light both continuity and change in death practices over time. They also explore the interrelated issues of how Buddhist death rites have addressed individual concerns about the afterlife while also filling social and institutional needs and how Buddhist death-related practices have assimilated and refigured elements from other traditions, bringing together disparate, even conflicting, ideas about the dead, their postmortem fate, and what constitutes normative Buddhist practice.

The idea that death, ritually managed, can mediate an escape from deluded rebirth is treated in the first two essays. Sarah Horton traces the development in Heian Japan (794-1185) of images depicting the Buddha Amida descending to welcome devotees at the moment of death, while Jacqueline Stone analyzes the crucial role of monks who attended the dying as religious guides. Even while stressing themes of impermanence and non-attachment, Buddhist death rites worked to encourage the maintenance of emotional bonds with the deceased and, in so doing, helped structure the social world of the living. This theme is explored in the next four essays. Brian Ruppert examines the roles of relic worship in strengthening family lineage and political power; Mark Blum investigates the controversial issue of religious suicide to rejoin one's teacher in the Pure Land; and Hank Glassman analyzes how late medieval rites for women who died in pregnancy and childbirth both reflected and helped shape changing gender norms.

The rise of standardized funerals in Japan's early modern period forms the subject of the chapter by Duncan Williams, who shows how the Soto Zen sect took the lead in establishing itself in rural communities by incorporating local religious culture into its death rites. The final three chapters deal with contemporary funerary and mortuary practices and the controversies surrounding them. Mariko Walter uncovers a "deep structure" informing Japanese Buddhist funerals across sectarian lines – a structure whose meaning, she argues, persists despite competition from a thriving secular funeral industry. Stephen Covell examines debates over the practice of conferring posthumous Buddhist names on the deceased and the threat posed to traditional Buddhist temples by changing ideas about funerals and the afterlife. Finally, George Tanabe shows how contemporary Buddhist sectarian intellectuals attempt to resolve conflicts between normative doctrine and on-the-ground funerary practice, and concludes that human affection for the deceased will always win out over the demands of orthodoxy.

Death and the Afterlife in Japanese Buddhism constitutes a major step toward understanding how Buddhism in Japan has forged and retained its hold on death-related thought and practice, providing one of the most detailed and comprehensive accounts of the topic to date.