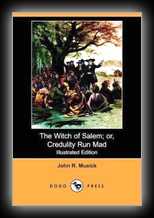 In 1691, this notorious episode in the history of early New England began to unfold in a small rural neighborhood on the outskirts of Salem town, then the second-largest seaport in Massachusetts Bay Colony. Several adolescent girls in Salem Village began to exhibit strange and alarming symptoms that some of their parents quickly came to interpret as the result of witchcraft. When urged by those adults to identify who had bewitched them, the girls first named several of their neighbors in Salem Village and then gradually widened the circle of those accused to include hundreds of people in Salem town and other Massachusetts Bay communities. By the spring of 1692 the jails were crowded with suspects, and before the hysteria at last subsided at the end of that year, twenty people had been executed for witchcraft—which was treated as a capital crime in seventeenth-century New England, as it was elsewhere in early modern Europe.

What commands so much notice is, in part, the peculiarity of what happened at Salem Village within the broader context of British North American experience. While similar witch crazes had wracked many early modern European communities and often resulted in mass trials and executions, most cases of witchcraft in colonial communities (nearly all of them in New England) typically involved only one suspect, and relatively few prosecutions ended in the execution of the accused witch.