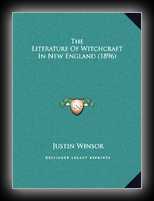 The Literature of Witchcraft in New England
by Justin Winsor
1896

The sporadic and epidemic manifestations of witchcraft during the seventeenth century in New England were but symptoms of a belief in satanic agencies, world-wide and pervading all ages. As a psychological symptom, it has created a large number of treatises, learned or emotional, some confidently adhering to the belief, others corrective or sternly critical. Lecky, who has touched the subject in his History of nationalism, gives high praise to the learning and ability of Maury s Histoire de la Magie (P aris, 1860). The retrospections of the Commentaries of Blackstone, the records (1661) of the Tryal of Witches at the Assizes for the County of Suffolk, March, 1664, before Sir Matthew Hale (L ondon, 1682), (which Cotton Mather summarized in his Wonders of the Invisible World), andr .G lanvil s Sadducismus triumjphans, or full and plain evidence concerning witches and apparitions (L ondon, 1681,) a book on which the Mathers feasted show how thoroughly perverse public opinion was in England in the days when colonial New England looked thither for guid-: ance. The commonness of the frenzy is shown in such books as W. H. D. A dams s Historical sketches of magic and witchcraft in England and Scotland (L ondon, 1889). Michael Dal tons Country Justice (1619, etc.,) was the authority for the English practice in such trials. Dr. Haven, in his Report to the American Antiquarian Society (A pril 24, 1874), says of Dalton sbook: The
(Typographical errors above are due to OCR software and don't occur in the book.)