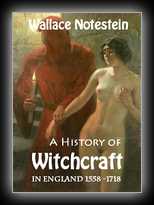 "The year 1566 is hardly less interesting in the history[33] of English witchcraft than 1563. It has been seen that the new statute passed in 1563 was the beginning of a vigorous prosecution by the state of the detested agents of the evil one. In 1566 occurred the first important trial known to us in the new period. That trial deserves note not only on its own account, but because it was recorded in the first of the long series of witch chap-books—if we may so call them. A very large proportion of our information about the execution of the witches is derived from these crude pamphlets, briefly recounting the trials. The witch chap-book was a distinct species. In the days when the chronicles were the only newspapers it was what is now the "extra," brought out to catch the public before the sensation had lost its flavor. It was of course a partisan document, usually a vindication of the worthy judge who had condemned the guilty, with some moral and religious considerations by the respectable and righteous author. A terribly serious bit of history it was that he had to tell and he told it grimly and without pity. Such comedy as lights up the gloomy black-letter pages was quite unintentional. He told a story too that was full of details trivial enough in themselves, but details that give many glimpses into the every-day life of the lower classes in town and country.[34]

The pamphlet of 1566 was brief and compact of information. It was entitled The examination and confession of certaine Wytches at Chensforde in the Countie of Essex before the Quenes Maiesties Judges the XXVI daye of July anno 1566. The trial there recorded is one that presents some of the most curious and inexplicable features in the annals of English witchcraft. The personnel of the "size" court is mysterious. At the first examination "Doctor Cole" and "Master Foscue" were present. Both men are easily identified. Doctor Cole was the Reverend Thomas Cole, who had held several places in Essex and had in 1564 been presented to the rectory of Stanford Rivers, about ten miles from Chelmsford. Master Foscue was unquestionably Sir John Fortescue, later Chancellor of the Exchequer, and at this time keeper of the great wardrobe. On the second examination Sir Gilbert Gerard, the queen's attorney, and John Southcote, justice of the queen's bench, were present. Why Southcote should be present is perfectly clear. It is not so easy to understand about the others. Was the attorney-general acting as presiding officer, or was he conducting the prosecution? The latter hypothesis is of course more consistent with his position. But what were the rector of Stanford Rivers and the keeper of the great wardrobe doing there? Had Doctor Cole been appointed in recognition of the claims of the church? And the keeper of the wardrobe, what was the part that he played? One cannot easily escape the conclusion that the case was deemed one of unusual significance. Perhaps the privy council had heard of something that alarmed it and had delegated these four men, all known[35] at Elizabeth's court, to examine into the matter in connection with the assizes."