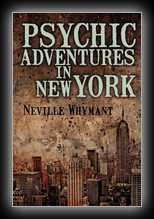 When he and his wife were invited to the New York City Park Avenue home of Judge and Mrs William Cannon for a dinner party during October 1926, Dr Neville Whymant, a professor of linguistics at Oxford and London Universities, had no idea that he would be attending a séance with American direct-voice medium George Valiantine. Mrs Cannon explained to Whymant that she feared he would decline the invitation if she had told him what was going to take place. She further explained that she needed someone with knowledge of Oriental languages to do some interpreting as what seemed to be a Chinese-speaking spirit had been breaking in at prior sittings with Valiantine. Whymant, who spoke 30 languages, was in the United States to study the languages of the American Indian. While having no interest in Spiritualism and being somewhat skeptical, Whymant felt obligated to remain for the sitting. 'There was no appearance or suspicion of trickery,' Whymant recorded in this book, 'but I mention these things to show that I was alert from the beginning, and I was prepared to apply all the tests possible to whatever phenomena might appear.' As soon as the lights were turned off, the group recited the Lord's Prayer and then sacred music was played on a gramophone. Voices came through for other sitters before Mrs Whymant's father communicated in his characteristic drawl, reminiscent of the West County of England. The group then heard the 'sound of an old wheezy flute not too skillfully played.' It reminded Whymant of sounds he had heard in the streets of China. When the flute-like sound faded, Whymant heard a 'voice' directed at him through the trumpet say in an ancient Chinese dialect: 'Greeting, O son of learning and reader of strange books! This unworthy servant bows humbly before such excellence.' Whymant responded in more modern Chinese: 'Peace be upon thee, O illustrious one. This uncultured menial ventures to ask thy name and illustrious style.' The 'voice' replied: 'My mean name is K'ung, men call me Fu-tsu, and my lowly style is Kiu.' Whymant recognized this as the name by which Confucius was canonized. Not certain that he heard right, Whymant asked for the voice to repeat the name. 'This time without any hesitation at all came the name K'ung-fu-tzu,' Whymant wrote. 'Now I thought, was my opportunity. Chinese I had long regarded as my own special research area, and he would be a wise man, medium or other, who would attempt to trick me on such soil. If this tremulous voice were that of the old ethicist who had personally edited the Chinese classics, then I had an abundance of questions to ask him. Psychic Adventures in New York details the fascinating series of events recorded by Whymant in 1931, of his sittings with the medium George Valiantine. In the introduction of this book he writes; By strange and unfathomable routes come men's greatest adventures. I little thought that a pleasant dinner party in Park Avenue, New York, was to raise the curtain on one of the most exacting and inexplicable episodes of my life. There is a story in it, and it is the story which is here set down; no complicated psychological analysis has been attempted in this place.