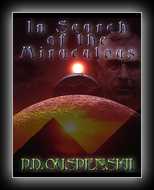 In Search of the Miraculous - Fragments of an Unknown Teaching
by P.D. Ouspensky
1924

A new edition of the groundbreaking spiritual treasure, with a foreword by bestselling author Marianne Williamson .

Since its original publication in 1949, In Search of the Miraculous has been hailed as the most valuable and reliable documentation of G. I. Gurdjieff's thoughts and universal view. This historic and influential work is considered by many to be a primer of mystical thought as expressed through the Work, a combination of Eastern philosophies that had for centuries been passed on orally from teacher to student. Gurdjieff's goal, to introduce the Work to the West, attracted many students, among them Ouspensky, an established mathematician, journalist, and, with the publication of In Search of the Miraculous, an eloquent and persuasive proselyte.

Ouspensky describes Gurdjieff's teachings in fascinating and accessible detail, providing what has proven to be a stellar introduction to the universal view of both student and teacher. It goes without saying that In Search of the Miraculous has inspired great thinkers and writers of ensuing spiritual movements, including Marianne Williamson, the highly acclaimed author of A Return to Love and Illuminata. In a new and never-before-published foreword, Williamson shares the influence of Ouspensky's book and Gurdjieff's teachings on the New Thought movement and her own life, providing a contemporary look at an already timeless classic.

n Search of the Miraculous Fragments of an Unknown Teaching stands as one of the great classic texts of man’s eternal search for meaning and being. When Piotr Demianovich Ouspensky (1878-1947) met Gurdjieff in St. Petersburg in 1915, he was uniquely prepared to resonate to the latter’s call, and was to become one of the most important people to help spread Gurdjieff’s ideas in the world. He was already a popular journalist and accomplished writer who had written several books on esoteric traditions (his seminal Tertium Organum was published in 1912). He had just returned from his own extensive search in the East, where he encountered a number of “teachers” but had not found what he was looking for—an esoteric school, with a genuine teacher. In Gurdjieff he recognized such a teacher, and became a student. Later he distanced himself from Gurdjieff, for reasons that are hinted at in the present book and in other places, but which remain mysterious. Ouspensky himself became an important teacher, in a form derived almost entirely from Gurdjieff. He attracted many students in London, and later in New Jersey where he moved in 1941. He continued to work on the extensive notes he had made during his period studying directly with Gurdjieff (1915-1924). Shortly before he died, he finished the present book, which was based on these notes.