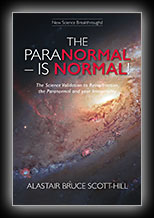 The Paranormal - Is Normal: The Science Validation to Reincarnation, Your Immortality and the Paranormal
by Alastair Bruce Scott-Hill, B.E. (Elect)
2016

If ever you wished to know the hard facts about just about everything concerned with the paranormal and the possibility of an afterlife, then this is the book for you. Written by a professional engineer dedicated to science - he chose his standard test for validity by accepting solely “solid” science i.e. documented replicated science experiments as the base for his investigations into Reincarnation, the Paranormal and the possibility of an afterlife and immortality for all. The book was written as a sequel to the personal journey of inquiry by the author which commenced some 15 years ago, but which was abandoned until relatively recent research provided the science breakthroughs that has now allowed its completion.

The book is unique and a milestone in its genre, in that it gives welcome scientific support to the public majority who believe in a creator, an afterlife, psychics, mediums and the paranormal. All of these are covered in considerable detail in this book with a constant focus on science validation. This treatment also embraces other big questions in life particularly whether mind, our soul and senses can likely survive death; evolution – scientifically fact or fiction; whether life could exist before the Big Bang; and even whether a timeless afterlife existence is scientifically plausible? And many more. Although a science book, it has been written with considerable attention to clarity, so that it is readable and understandable to all.

“Because Science can’t see, identify, or find God in a microscope or telescope, many people rationalize that there is nothing more, after this material life - that there is no such thing as a soul that survives death in a spiritual world. Alastair (Bruce) Scott-Hill was of that mind-set until he began exploring scientifically areas outside the boundaries of mainstream science, territory beyond discernment with any man-made instrument.  His explorations took him over some very rough terrain and through murky waters, territory in which only the most resolute survive.  The few who do survive usually struggle to explain their findings in language that most can comprehend.  But Scott-Hill, with skills honed in a 35-year career as a professional communication engineer and information technology systems designer, is able to translate the seemingly complex, into a relatively simple system.  He tells of finding an afterlife - the survival of consciousness after death - supported by quantum physics and with scientific evidence founded in reincarnation research, mediumship, out-of-body experiences, and other paranormal phenomena. Where science generally offers only despair, Scott-Hill offers hope that goes beyond the blind faith of orthodox religion and into providing true afterlife validation and belief for us all.”

Michael Tymn, Editor, The Journal for Spiritual and Consciousness Studies
Mike Tymn, a 1958 graduate of the School of Journalism (B.A. Public Relations) at San Jose State University, is considered one of the world’s foremost living experts on evidential afterlife studies. In particular in the provision of an unparalleled coverage of evidence concerning mediumship over a very large historical time period in his six published books to date. A number of these are bestsellers. He has contributed more than 1,600 articles to some 40 newspapers, magazines, journals, together with his six afterlife books over the past 60 years. He won the 1999 Robert H. Ashby Memorial Award given by The Academy of Religion and Psychical Research for his essay on “Dying, Death, and After Death.

“A clearly written, well researched and richly detailed meditation on the reasons, scientific and experiential, for a belief in the survival of death and reincarnation.  Against those who hold that modern science has invalidated such ideas, Bruce Scott-Hill is surely right to insist on the many ways in which they are in fact supported by post-classical physics. A stimulating read!”
Robert McLuhan, Robert McLuhan gained a First in English Literature at Oxford University, then worked as a foreign correspondent for the Guardian in Spain and Portugal before becoming a freelance journalist. He has been a member of the Society for Psychical Research since 1993. McLuhan writes columns for a number of English newspapers and has authored three books to date including his latest, Randi’s Prize: What Sceptics Say About the Paranormal, Why They Are Wrong, and Why It Matters. He is editor of “Paranormia”, a website which deals with consciousness, spirituality, and psychic research.

“Alastair (Bruce) Scott-Hill, a Professional Engineer, [...] has had a number of major paranormal experiences, and with his strong interest in open-minded science he has spent the past sixteen years intensively studying what quantum physics and other disciplines might have to explain these experiences and the paranormal in general. An especial interest of his has been the question of reincarnation. Bruce set himself the task of producing a “beyond all reasonable doubt” understanding of the truth of the matter. As might be expected of such a writer, his presentation is clear, logical and concise: and I found it convincing. I find it illuminating, fascinating, and expect to refer to it, again and again. I have studied the field in which Scott-Hill writes for many years, and am glad to say that where previously I felt confused, I am now less so.

In his first Chapter of his book [...] Scott-Hill explores the issue of creation by design or by chance in great detail, and exposes the absurdity of the notion of “chance”. Design implies conscious mind, and the rest of the book explores this from many points of view. I outline his arguments a little more fully, because denying Darwinism sounds heretical. I am however convinced by his arguments. The idea of a Creator or creative process is considered in relation to Beauty, then the Laws of Physics, and especially the “Big Bang”, the fine-tuning of the universe, the ever increasing complexity.
He summarises with:
“Principle 1 - A non-physical timeless (but contingent) quantum-like realm beyond our current physical existence is possible, where things and events respond directly to consciousness/intention.
Principle 2 - The Universe overwhelmingly exhibits design, information, intelligence and mind. It is also biocentric, therefore providing compelling evidence not only for a creator/God as the first cause, but with its purpose including the creation of all life.”
Chapter 2 – Non-Physical Reality, Independence of the Mind from the Brain, Consciousness and Immortality. Here he explores the realm depicted by physicists, non-local causation, including quantum-entanglement, the EPR effect, and the holographic universe. All familiar ground for me. But I was struck by this quote: “One of the most shattering concepts which follows from acceptance of a holographic universe theory is that, at the quantum or non-physical level, information does not travel through time and space from one ‘physical’ location to another; instead, the subatomic particles themselves simply seem to exist in a dimension which renders time and space (i.e. distance), irrelevant.” Surely here lies a key to understanding a great many paranormal phenomena, otherwise inexplicable. Scott-Hill explores this in fascinating detail in an Annex to Chapter 4 “Further considerations of Time and Space.”
Bruce then explores whether mind resides in the brain. His answer of course, is No, and he explores this at length, but keeping the reader eager to read what next is to follow. He then remarks, “In short, consciousness creates reality!” “we continuously and unconsciously actually create our own separateness and reality based in time” “the universe is purely mental: .. mind is fundamental; matter merely an illusion - and that this is physics, not philosophy (or religion).”   “We are immortal!”
This review will be too long if I attempt to discuss the whole book. But I will quote the other “Principles” by which he summarises his main points as he proceeds:
“Principle 3 - Mind is primary, as with consciousness. Consciousness creates reality. We are immortal.
Principle 4 - The physics exists, such that on death, our consciousness, mind, memory (i.e. one’s psyche and soul) plus senses could transfer and exist in a timeless realm.
Principle 5 - Recent scientific advancements can now explain the paranormal, psychic ability and the ability to communicate with discarnates or other entities in other realities. Principle 6 - The science of time and space supports belief in reincarnation.
[...]
Do explore this book.”

Rev. Michael D S Cocks, a former Anglican Vicar, Christchurch, New Zealand. He gained Honours in Theology at Oxford, and Honours degrees in Philosophy and Psychology in New Zealand, and read at St Catherine’s, and also at Ripon Hall - a modern theological college. Michael has published two books, “the Afterlife Teaching from Stephen the Martyr” and “Into the Wider Dream: Synchronicity in the Witness Box.” For this book Michael was awarded finalist status in the 2015 Ashton-Wylie Book Prize. He is currently editor of “The Ground of Faith” website.