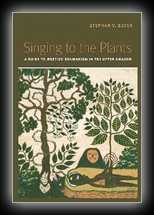 Singing To The Plants - Guide to Mestizo Shamanism in the Upper Amazon
by Stephan V. Beyer
2009

In the Upper Amazon, mestizos are the Spanish-speaking descendants of Hispanic colonizers and the indigenous peoples of the jungle. Some mestizos have migrated to Amazon towns and cities, such as Iquitos and Pucallpa; most remain in small villages, their houses perched on stilts on the shores of the rivers that are their primary means of travel. Here in the jungle, they have retained features of the Hispanic tradition, including a folk Catholicism and traditional Hispanic medicine. And they have incorporated much of the religious tradition of the Amazon, especially its healing, sorcery, shamanism, and the use of potent plant hallucinogens, including ayahuasca. The result is a uniquely eclectic shamanist culture that continues not only to fascinate outsiders with its brilliant visionary art but also to attract thousands of seekers each year with the promise of visionary experiences of their own.

Ayahuasca shamanism is now part of global culture. The visionary ayahuasca paintings of Pablo Cesar Amaringo are available to a world market in a sumptuous coffee-table book; international ayahuasca tourists exert a profound economic and cultural pull on previously isolated local practitioners; ayahuasca shamanism, once the terrain of anthropologists, is the subject of novels and spiritual memoirs. Ayahuasca shamans perform their healing rituals in Ontario and Wisconsin.

Singing to the Plants sets forth, in accessible form, just what this shamanism is about -- what happens at an ayahuasca healing ceremony, how the apprentice shaman forms a spiritual relationship with the healing plant spirits, how sorcerers inflict the harm that the shaman heals, and the ways that plants are used in healing, love magic, and sorcery. The work emphasizes both the uniqueness of this highly eclectic and absorptive shamanism -- plant spirits dressed in surgical scrubs, extraterrestrial doctors speaking computer language -- and its deep roots in shamanist beliefs and practices, both healing and sorcery, common to the Upper Amazon. The work seeks to understand this form of shamanism, its relationship to other shamanisms, and its survival in the new global economy, through anthropology, ethnobotany, cognitive psychology, legal history, and personal memoir.