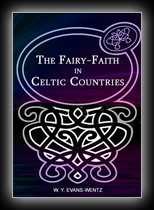 The Fairy-Faith in Celtic Countries
by W.Y. Evans-Wentz
1911

Collection of firsthand reports of elfin creatures in Wales, Ireland, Scotland, and Brittany, classified by country and introduced by leading authorities on anthropology and folklore. Also, recorded traditions of Celtic literature and mythology, variety of theories and their religious aspects, and a remarkably rational case for the reality of fairy life.

“The Fairy-Faith in Celtic Countries” is the broadest, most scholarly, yet open-minded exploration of the whole concept of this place and these beings we usually cannot even see. Evans-Wentz was catching the last of the lore as it was seen and believed in by the old people who would've come of age in the 19th century, since he was recording their stories about 1910, in out of the way places where the inroads of the Industrial Age had not made a permanent home in the mind sets of the country people. There is so much in this one book, it would tax me to list it all; so dive in for yourself and see, and hear the words of the people as Evan-Wentz recorded them. He does it in an admirable way, though he, as an American, was an outsider coming into this lore, the respect he feels for the knowledge and insights, the values and views of the informants is evident in every line.