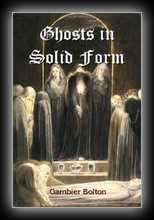 As scientists in many parts of the world today are turning their serious attention to the question of the origin and the (possible) continuity of Life, I feel that the time has now arrived when a text-book on the subject of the phenomena, known to investigators as Materialisations

As scientists in many parts of the world today are turning their serious attention to the question of the origin and the (possible) continuity of Life, I feel that the time has now arrived when a text-book on the subject of the phenomena, known to investigators as Materialisations, should be issued to the public, in order to assist inquirers, both scientists and laymen, in their endeavour to solve these vitally important matters; as, in my opinion, it is by no means improbable that in Materialisations we may find the clue which will eventually enable us to solve the question, asked by each cradle, "Whence?" and by each coffin, "Whither?"

LOOKING back to the seven years of my life which I devoted to a careful and critical investigation of the claim made, not only by both Occidental and Oriental mystics, but by well-known men of science like Sir William Crookes, Professor Alfred Russel Wallace, and others-that it was possible under certain clearly defined conditions to produce, apparently out of nothing, fully formed bodies, inhabited by (presumably) human entities from another sphere-the wonder of it still enthrals me; the apparent impossibility of so great an upheaval of such laws of Nature as we are at present acquainted with, being proved clearly to be possible, will remain to the end as "the wonder of wonders" in a by no means uneventful life.

For, as compared with this, that greatest of Nature's mysteries, the procreation of a human infant-by either the normal or mechanical impregnation of an ovum-its months of fetal growth and development in the uterus, and its birth into the world in a helpless and enfeebled condition, amazing as they are to all physiological students,-sinks into comparative insignificance when compared with the nearly instantaneous production of a fully developed human body, with all its organs functioning properly; a body inhabited temporarily by a thinking, reasoning entity, who can see, hear, taste, smell and touch: a body which can be handled, weighed, measured, and photographed. When these claims were first brought to my notice I realised at once that I was face to face with a problem which would require the very closest investigation; and I then and there decided to give up work of all kinds, and to devote years, if necessary, to a critical examination of these claims; to investigate the matter calmly and dispassionately, and, in Sir John Herschel's memorable words, "to stand or fall by the result of a direct appeal to facts in the first instance, and of strict logical deduction from them afterwards."

And, as I have said, the result has been that the apparently impossible has been proved to be possible; and I accept them whole-heartedly, admitting that our working hypothesis has been proved beyond any possibility of doubt, and that these materialised entities can manifest themselves today to any person who will provide the conditions necessary for such a demonstration.

Who they are, what they are, whence they come, and whither they go, each investigator must determine for himself; but of their actual existence in a sphere just outside our own, there can no longer be any room for doubt. As a busy man, theories have little or no attraction for me.