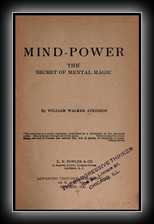 Mind-power: The Secret of Mental Magic
by William Walker Atkinson
1912

William Walker Atkinson was one of the first authors to write about the law of attraction, or in other words that "like attracts like". Decades before Esther and Jerry Hick's "Money and the Law of Attraction" or Rhonda Byrnes "The Secret", he taught taught readers how to use the power of thought to attract wealth, health, happiness and success.

"There is a great ocean of Universal Will, in which we are but centers of activity, and if we will but open ourselves to the power and will contained therein, we will have an unfailing store of power upon which to draw.I wish to invite you to the consideration of a great principle of Nature-a great natural force that manifests its activities in the phenomena of Dynamic Mentation-a great Something the energies of which I have called "MIND POWER."

We shall remove indifference, fear, and doubt, and I Can't. And replace them with I Can; I Will; I Dare; and I Do!" - William Walker Atkinson

Considered by some to be his masterpiece, this 1912 work is the culmination of decades worth of study by William Walker Atkinson, one of the most influential thinkers of the early-20th-century "New Age" philosophy of New Thought, which encouraged its adherents to learn the secrets of mind over matter. They did so via Atkinson's instruction, and here, in one concise volume, are his lessons on:

. mental magic
. desire and will
. personal magnetism
. mind-power in action
. four kinds of suggestion
. and more.