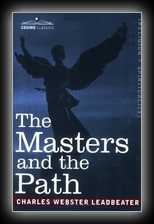 The Masters and the Path
by C.W. Leadbeater
1925

Charles Webster Leadbeater was ordained an Anglian priest in 1879 but, just four years later, a deep interest in spiritualism and the occult caused him to sever his ties with the church and to join the Theosophical Society, where he soon became a high official.

Leadbeater traveled extensively in India and described meeting and training under Ascended Masters who, (according to Madame Blavatsky), were the secret chiefs of the Theosophical movement.

One important result of this experience was his classic occult manual "The Masters and the Path", which explores the route of Discipleship under the guidance of Ascended Masters. An inspiring and uplifting work, eloquently written, it reveals innumerable details concerning the Way of the Masters, exploration of the Inner Planes, the disciplines required for advancement, and the plans gradually being put in place by these advanced Beings for the unfolding of human consciousness.