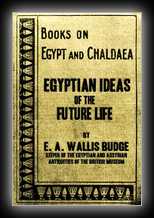 Egyptian Ideas of the Future Life
by Sir Wallis Budge
1899

THE following pages are intended to place before the reader in a handy form an account of the principal ideas and beliefs held by the ancient Egyptians concerning the resurrection and the future life, which is derived wholly from native religious works. The literature of Egypt which deals with these subjects is large and, as was to be expected, the product of different periods which, taken together, cover several thousands of years; and it is exceedingly difficult at times to reconcile the statements and beliefs of a writer of one period with those of a writer of another.

Up to the present no systematic account of the doctrine of the resurrection and of the future life has been discovered, and there is no reason for hoping that such a thing will ever be found, for the Egyptians do not appear to have thought that it was necessary to write a work of the kind. The inherent difficulty of the subject, and the natural impossibility that different men living in different places and at different times should think alike on matters which must, after all, belong always to the region of faith, render it more than probable that no college of priests, however powerful, was able to formulate a system of beliefs which would be received throughout Egypt by the clergy and the laity alike, and would. be copied by the scribes as a final and authoritative work on Egyptian eschatology.

Besides this, the genius and structure of the Egyptian language are such as to preclude the possibility of composing in it works of a philosophical or metaphysical character in the true sense of the words. In spite of these difficulties, however, it is possible to collect a great deal of important information on the subject from the funereal and religious works which have come down to us, especially concerning the great central idea of immortality, which existed unchanged for thousands of years, and formed the pivot upon which the religious and social life of the ancient Egyptians actually turned.

From the beginning to the end of his life the Egyptian's chief thought was of the life beyond the grave, and the hewing of his tomb in the rock, and the providing of its furniture, every detail of which was prescribed by the custom of the country, absorbed the best thoughts of his mind and a large share of his worldly goods, and kept him ever mindful of the time when his mummified body, would be borne to his "everlasting house" in the limestone plateau or bill.

The chief source of our information concerning the doctrine of the resurrection and of the future life as held by the Egyptians is, of course, the great collection of religious texts generally known by the name of "Book of the Dead." The various recensions of these wonderful compositions cover a period of more than five thousand years, and they reflect faithfully not only the sublime beliefs, and the high ideals, and the noble aspirations of the educated Egyptians, but also the various superstitions and childish reverence for amulets, and magical rites, and charms, which they probably inherited from their pre-dynastic ancestors, and regarded as essentials for their salvation. - Preface E.A. Wallis Budge.

A prolific Victorian Egyptologist explores, in this class book first published in 1899, the position of Ra, Osiris, Set, and Isis among the diverse pantheon of numerous deities of ancient Egypt, as well as their domination of the collective imagination of this sophisticated civilization.Hymns from The Book of the Dead illustrate the beliefs of the Egyptian peoples regarding the afterlife, judgment after death, resurrection, and immortality.

The writings of E.A. Wallis Budge are considered somewhat controversial today because of his use of an archaic system of translation, but useful illustrations and an abundance of information make them necessary resources for students of the ancient world as well as those of the evolution of historical study. Conveying the beauty and power of the religion of ancient Egypt, this fascinating book remains an important work today. Sir E.A. WALLIS BUDGE (1857-1934) was curator of Egyptian and Assyrian antiquities at the British Museum form 1894 to 1924. Among his many works of translation and studies of ancient Egyptian religion and ritual is his best-known project, The Egyptian Book of the Dead.