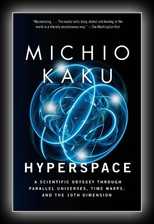 Hyperspace - A Scientific Odyssey Through Parallel Universes, Time Warps, and the Tenth Dimension
by Michio Kaku
1994

Already thoroughly familiar to the seasoned science fiction fan, Hyperspace is that realm which enables a spaceship captain to take his ship on a physics-defying shortcut (or "wormhole") to the outer shores of the Galaxy in less time than it takes a 747 to fly from New York to Tokyo.

But in the past few years, physicists on the cutting edge of science have found that a 10-dimensional Hyperspace may actually exist, albeit at a scale almost too small to comprehend, smaller even than a quark; and that in spite of its tiny size, it may be the basis on which all the forces of nature will be united.

This is the first book for a general audience on one of the latest, most exciting developments in modern science. In the past several years, theoretical physicists--the author among them--have discovered that the universe exists not merely in the four spacetime dimensions (3 of space + one of time) with which Einstein made us familiar, but rather as a ten-dimensional Hyperspace.

Once the domain of the science fiction writer or the occultist, Hyperspace has recently been shown to be the only kind of space in which the laws of modern physics can be satisfactorily explained. Amazingly enough, many of the phenomena whose explanations have stymied 20th century physicists and cosmologists can now be perfectly clarified by using the ten dimensions of Hyperspace.

Most importantly, Einstein's unfulfilled dream, the work on which he spent the last several decades of his life in vain--the unification of all the forces of nature--now sits waiting on the ten-dimensional doorstep of modern theoretical physicists.

Michio Kaku--theoretical high-energy physicist, author, radio talkshow host, and nuclear disarmament activist--is one of the pioneers in the field of String Theory, which states that the basic constituents of our universe are not quarks or protons or electrons, but much smaller entities called "strings" or "superstrings", which vibrate--like violin strings--in 10 dimensional Hyperspace, and whose vibrations in different resonances are manifested in the elementary particles.

In his book, Kaku takes the reader on a ride through Hyperspace to the edge of physics. On the way he gives crystal clear explanations of such formidable mathematical concepts as non-Euclidean Geometry, Kaluza-Klein Theory, and Supergravity, the everyday tools of the string theorist. Utilizing fascinating and often hilarious anecdotes from history, from art, and from science fiction, Kaku shows us that writers and artists--in addition to scientists--have been fascinated by multidimensional space for over a century. In fact, many of the weird effects created by such famous artists as Dali and Picasso can be explained and more appreciated with an eye on the fourth spatial dimension.

Finally, Kaku shows us why the ability to master Hyperspace may be our only salvation from destruction at the end of space-time. This lively yet authoritative book is spiced with many whimsical illustrations in a style reminiscent of the late science writer George Gamow.