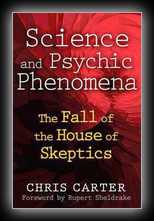 Science and Psychic Phenomena: The Fall of the House of Skeptics
by Chris Carter, Rupert Sheldrak (Foreword)
2012

Reports of psychic abilities, such as telepathy, clairvoyance, precognition, and psychokinesis, date back to the beginning of recorded human history in all cultures. Documented, reproducible evidence exists that these abilities are real, yet the mainstream scientific community has vehemently denied the existence of psi phenomena for centuries.

The battle over the reality of psi has carried on in scientific academies, courtrooms, scholarly journals, newspapers, and radio stations and has included scandals, wild accusations, ruined reputations, as well as bizarre characters on both sides of the debate. If true evidence exists, why then is the study of psi phenomena--parapsychology--so controversial? And why has the controversy lasted for centuries?

Exploring the scandalous history of parapsychology and citing decades of research, Chris Carter shows that, contrary to mainstream belief, replicable evidence of psi phenomena exists. The controversy over parapsychology continues not because ESP and other abilities cannot be verified but because their existence challenges deeply held worldviews more strongly rooted in religious and philosophical beliefs than in hard science.

Carter reveals how the doctrine of materialism--in which nothing matters but matter--has become an infallible article of faith for many scientists and philosophers, much like the convictions of religious fundamentalists. Consequently, the possibility of psychic abilities cannot be tolerated because their existence would refute materialism and contradict a deeply ingrained ideology. By outlining the origin of this passionate debate, Carter calls on all open-minded individuals to disregard the church of skepticism and reach their own conclusions by looking at the vast body of evidence.