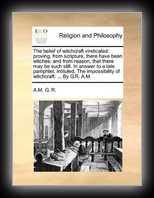 The Belief of Witchcraft Vindicated
by G.R.A.M.
1712

THE late Tryal and Condemnation of Jane Wenham for a Witch, at Hertford Assizes, having occasion'd many and various Speculations upon the Subject of Witchcraft, and many that I have convers'd with concluding, that there neither is, nor can be any such Thing, I was naturally led into a deeper Search of the Subject, than I had either Leisure or Inclination to allow my self before, and to consider whether such an Opinion, so contrary to that of our Forefathers, and our Laws, so contrary to innumerable Historical Matters of Fact, so contrary to plain Scripture, as we find it in our Translation, be founded upon any Reason that can support so great a Weight, as to over-bear all these several Arguments produceable on the contrary Side of the Question.

Accordingly I drew up such Considerations as presently occurr'd, and concluded, as I thought, that I had good Reason to believe that Witchcraft was not only possible, but was very credible; but was resolv'd not to be so prepossess'd, by my own Observations, as not to be always ready to embrace the contrary Opinion, when ever Arguments should be offer'd, that I could judge strong enough to incline me to such a Change of my Thoughts: When, therefore, such a pompous and assuming Title appear'd in the Advertisements of a Book, as plainly proving from Scripture and Reason, that there never was a Witch, and that it is both Irrational and Impious to believe there ever was; together with a Confutation of the Depositions against Jane Wenham, I was resolv'd to consider it with all the Coolness and Indifference imaginable, so as to come over to the Author's Side, if I found Reason so to do: