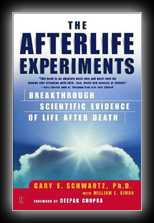 John Edward, Suzane Northrup, and George Anderson are just a few of the prominent American mediums who have been accused of being frauds. But what if a respected scientist challenged them to make contact with the beyond under controlled laboratory conditions? What if the results not only stunned a skeptical scientist but also offered astonishing answers to a timeless question: Is there life after death?

Risking his academic reputation, Dr. Gary E. Schwartz asked well-known mediums to become part of a series of experiments to prove, or disprove, the existence of an afterlife. This riveting narrative, with electrifying transcripts, documents stringently monitored experiments in which mediums attempted to contact dead friends and relatives of "sitters" who were masked from view and never spoke, depriving the mediums of any cues.

Here are the results that awed sitters and researchers alike: a revelation about a son's suicide, what a deceased father wanted to say about his last days in a coma, the transformation of a man's lifelong doubts about the afterlife, and, most amazing of all, a forecast of a beloved spouse's death. Forced by data to abandon skepticism, Schwartz presents this amazing account of his groundbreaking work, compelling from first page to last.