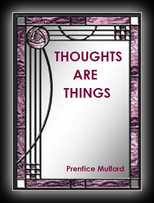 Thoughts Are Things
by Prentice Mulford
1908

Thoughts are Things by Prentice Mulford was instrumental in the founding of the popular philosophy, New Thought, along with other notable writers including Ralph Waldo Emerson. Mulford's book, Thoughts are Things served as a guide to this new belief system and is still very popular today. The Laws of Attraction is you are what you think.

Spirit is a force and a mystery. All we know or may ever know of it is that it exists and is ever working and producing all results in physical things, seen of physical sense - and many more not so seen. What is seen, of any object - a tree, an animal, a stone, a man - is only a part of that tree, animal, stone or man. There is a force which, for a time, binds such objects together in the form you see them. The spiritual mind today sees, belonging to itself, a power for accomplishing any and all results in the physical world, greater than the masses dream of. Life means the development in us of powers and pleasures, which fiction, in its highest flights, has never touched. This ever-acting, ever-varying force, which lies behind and, in a sense, creates all forms of matter, we call "spirit." We have, through knowledge, the wonderful power of using or directing this force, when we recognize it, and know that it exists, so as to bring us health, happiness and eternal peace of mind.