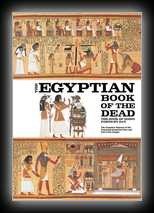 "Book of the Dead" is the title now commonly given to the great collection of funerary texts which the ancient Egyptian scribes composed for the benefit of the dead. These consist of spells and incantations, hymns and litanies, magical formulae and names, words of power and prayers, and they are found cut or painted on walls of pyramids and tombs, and painted on coffins and sarcophagi and rolls of papyri.

The title "Book of the Dead" is somewhat unsatisfactory and misleading, for the texts neither form a connected work nor belong to one period; they are miscellaneous in character, and tell us nothing about the lives and works of the dead with whom they were buried. Moreover, the Egyptians possessed many funerary works that might rightly be called "Books of the Dead," but none of them bore a name that could be translated by the title "Book of the Dead." This title was given to the great collection of funerary texts in the first quarter of the nineteenth century by the pioneer Egyptologists...

The Egyptian Book of the Dead is unquestionably one of the most influential books in all history. Embodying a ritual to be performed for the dead, with detailed instructions for the behavior of the disembodied spirit in the Land of the Gods, it served as the most important repository of religious authority for some three thousand years.

Chapters were carved on the pyramids of the ancient 5th Dynasty, texts were written in papyrus, and selections were painted on mummy cases well into the Christian Era. In a certain sense it stood behind all Egyptian civilization.

In the year 1888 Dr. E. Wallis budge, then purchasing agent for the British Museum, followed rumors he heard of a spectacular archeological find in Upper Egypt, and found in an 18th Dynasty tomb near Luxor "the largest roll of papyrus I had ever seen, tied with a thick band of papyrus , and in a perfect state of preservation."

This Papyrus of Ani, a full version of the Theban recension, is presented here by Dr. Budge, who later became perhaps the world`s most renowned Egyptologist.

Reproduced in full are a clear copy of the Egyptian hieroglyphs, an interlinear transliteration of their sounds (as reconstructed), a word-for-word translation, and separately a complete smooth translation. All this is preceded by an introduction of more than 150 pages.

As a result of this multiple apparatus the reader has a unique opportunity to savor all aspects of the Book of the Dead, or as it was otherwise known, The Book of Great Awakening.