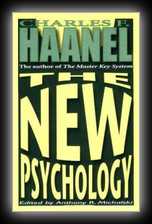 The New Psychology with a synthesis of philosophy, science, metaphysics, and religion-defines man's place in the universe and reveals his latent powers with a vividness that reminds the reader of a lightening flash.

Man is the architect of his own fortune. He can make or unmake himself. He can be weak or strong, rich or poor, according to the way he manipulates his consciousness and develops his inherent ability. This requires will power, determination, and self-improvement through work, activity, and study. He must learn to clothe his mind with beautiful garments of strength and power. He must be willing to spend as much money, time, and patience to bring about this mental garment as he would in clothing his body, beautifully and efficiently.

In The New Psychology by Charles F. Haanel, the author of the Master Key System, you will learn how to unlock the power of positive thinking. Haanel believe that if you learn to think in a certain way than success can be yours. An important self help book by one of the most important self help authors ever. Without Haanel We would never have had The Secret or The Power of Positive Thinking.

About the Author
CHARLES F. HAANEL

Charles F. Haanel is largely associated with the business interests of the city, being affiliated with a number of enterprises of acknowledged financial worth. Beside being president of the Continental Commercial Company he is also president of the Sacramento Valley Improvement Company and president of the Mexico Gold & Silver Mining Company. Mr. Haanel is in every sense of the word a self-made man, having risen in the commercial world to his present station of worth and prominence by the utilization of his own natural resources.

Born in Ann Arbor, Michigan, May 22, 1866, he is the son of Hugo and Emeline (Fox) Haanel, who removed with him to St. Louis when he was in early childhood. He initiated himself into the business world as an office boy for the National Enameling & Stamping Company. For this company he worked for a period of fifteen years. Finally he resigned his position with this firm and being ambitious to rise higher in the financial world, he conceived the idea of organizing a company for the purpose of promoting an enterprise.

At that time the vicinity of Tehuantepec, Mexico, was reputed as being especially adapted to the growth of sugar and coffee. He succeeded in convincing a number of capitalists of the feasibility of taking up land in that section of the country and working a plantation. The land was purchased and the company organized to engage in the raising of sugar and coffee. Of this company he was made president. The plantation was successful from the beginning and soon became! an enterprise of considerable financial worth. This was organized in 1898 and in 1905 Mr. Haanel organized the Continental Commercial Company which was consolidated with the other company and also absorbed six additional companies. It is now operating under the name of the Continental Commercial Company with Mr. Haanel as president. It is capitalized for two million five hundred thousand dollars, and is one of the largest of its kind in the world.

Mr. Haanel has by no means confined his efforts to these lines, however, but has extended his labors to other enterprises with which he is associated in a prominent capacity. He was one of the organizers of the Sacramento Valley Improvement Company and from the beginning has been its president. Since its inception the company has enjoyed an era of prosperity and now owns and controls the largest Tokay vineyards in the world. He is likewise president of the Mexico Gold & Silver Mining Company, a company of some importance in developing the rich mineral resources of the southern republic.