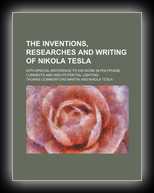 ... a definite height, We cannot go very far with a blast, nor by confining heat in a furnace, but in an exhausted bulb we can concentrate any amount of energy upon a minute button. Leaving practicability out of consideration, this, then, would be the means which, in my opinion, would enable us to reach the highest temperature. But a great difficulty when proceeding in this way is encountered, namely, in most cases the body is carried off before it can fuse and form a drop. This difficulty exists principally with an oxide, such as zirconia, because it cannot be compressed in so hard a cake that it would not be carried off quickly. I have endeavored repeatedly to fuse zirconia, placing it in a cup of arc light carbon, as indicated in Fig. lfi:'. It glowed with a most intense light, and the stream of the particles projected out of the carbon cup was of a vivid white; but whether it was compressed in a cake or made into a paste with carbon, it was carried off before it could be fused. The carbon cup, containing zirconia, had to be mounted very low in the neck of a large bulb, as the heating of the glass by the projected particles of the oxide was so rapid that in the first trial the bulb was cracked almost in an instant, when the current was turned on. The heating of the glass by the projected particles was found to be always greater when the carbon cup contained a body which was rapidly carried off--I presume, because in such cases, with the same potential, higher speeds were reached, and also because, per unit of time, more matter was projected--that is, more particles would strike the glass. The before-mentioned difficulty did not exist, however, when the body mounted in the carbon cup offered great resistance to deterioration. For instance, when an oxide was ...