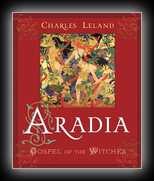 Aradia, Gospel of the Witches
by Charles Godfrey Leland
1899

Aradia, or the Gospel of the Witches is a book composed by the American folklorist Charles Leland, originally published in 1899. It contains what he believed was the religious text of a group of pagan witches in Tuscany, Italy, which documented their beliefs and rituals. Many historians and folklorists have disputed the existence of such a group.

In the 20th century, the book was very influential in the development of the Neopagan religion of Wicca. The text is a composite of Leland's translation into English of an original Italian manuscript, the Vangelo (gospel) and Leland's other research on Italian folklore and traditions. Leland reported receiving the manuscript from his primary informant on Italian witchcraft beliefs, a woman Leland referred to as "Maddalena". Leland had been informed of the Vangelo's existence in 1886, but he did not receive a copy until 1897. Its fifteen chapters portray the origins, beliefs, rituals, and spells of an Italian pagan witchcraft tradition.

Leland's work remained obscure until the 1950s, when other theories about, and claims of, "pagan witchcraft" survivals began to be widely discussed. Aradia began to be examined within the wider context of such claims. Scholars are divided, with some dismissing Leland's assertion regarding the origins of the manuscript, and others arguing for its authenticity as a unique documentation of folk beliefs. Along with increased scholarly attention, Aradia came to play a special role in the history of Gardnerian Wicca and its offshoots, being used as evidence that pagan witchcraft survivals existed in Europe, and because a passage from the book's first chapter was used as a part of the religion's liturgy.