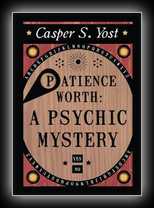 Patience Worth: A Psychic Mystery
by Casper S. Yost
1916

ON a July evening in 1913 two women of St. Louis sat with a Ouija board upon their knees. The result of what was to come has remained one of the biggest mysteries in literary history and a key event in psychical research to this day.

Spiritualism was still popular in certain circles and with World War I just over the brow of the hill, many families would soon want to connect with deceased love ones, and the Ouija board seemed an easy way to do this.

The women is question were Mrs. John H. Curran, wife of the former Immigration Commissioner of Missouri, and Mrs. Emily Grant Hutchings, wife of the Secretary of the Tower Grove Park Board in St. Louis. Mrs. John Curran was know to her friends as Pearl and on this particular night it became clear that Pearl was something of a sensitive or a medium, and in her presence the pointer of the Ouija board became agitated. The two women watched in amazement as without any physical help from them the board spelled out…"Many moons ago I lived. Again I come. Patience Worth my name."

The women gazed at each other as the board continued…"Wait. I would speak with thee. If thou shalt live, then so shall I. I make my bread by thy hearth. Good friends, let us be merrie. The time for work is past. Let the tabbie drowse and blink her wisdom to the firelog.

Although guarded about her identity, Patience identified herself as an English woman who lived in the 17th century who had emigrated to the USA and died at the age of 44. When pressed for more information about herself she stated, "About me," "thou wouldst know much. Yesterday is dead. Let thy mind rest as to the past."

By 1917, Patience had dictated millions of words, and these had been faithfully recorded by pearl’s husband John. In June of that year, to great fanfare, The Sorry Tale, a 644-page, 325,000 word novel about the last days of Jesus, dictated by Patience was published in the USA. The New York Globe stated that it exceeded Ben Hur and Quo Vadis as “a quaint realistic narrative.” And Professor Roland Greene Usher, dean of history at Washington University, called the novel “the greatest story of Christ penned since the Gospels were finished.” He pointed out that the book was written in seventeenth-century English with no anachronisms.

Patience had this to say on life: On life: ‘Life is a gaysome trickster. Yea, life poureth about the atoms o’ man wines of cunning, and equally is he filled up of Him. Thereby is man given freely and his lighting unto life leaveth him for his choosing. Aye, and the giving be wry-fallen atimes, for flesh to tarry long and dance with life, fearing the greater thing athin it.’

She considered herself a messenger from God, when she exclaimed; "Morn hath broke, and ye be the first to see her light. Look ye wide-eyed at His workings. He hath offered ye a cup."

When asked about Death she quipped: ‘Cheap pence paid for eternity and yet man whines!’

Patience continued to speak through Pearl until 1937 when Pearl was taken ill and died of Pneumonia.

Her works have been compared with Shakespeare and Chaucer, to this day remain one of the greatest examples of channelled writing we possess.