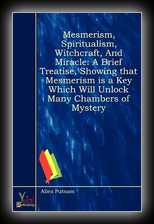 The design oi this little treatise was formed in the autumn of 1855. In February, 1856, the substance of it was given to the public at Salem, in the form of a lecture, and has since been repeated in many other places. Now its facts have been rearranged, and the comments somewhat extended, for the purpose of letting it reach the public without the author's presence.

The view here reached viz., that the marvels of all the ages have been produced in obedience to some universal law or laws is one of no small importance, if it be correct. It is sent forth that the reading world may look at it, and judge, each man for himself, whether it possess intrinsic value. It goes forth with the prayer, that it may shed light upon the direct pathways to truth, and prove to be a germ of benefit to man, as both mortal and immorial.