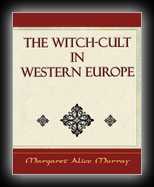 The Witch Cult in Western Europe
by Margaret Alice Murray
2001

The Witch-cult in Western Europe A Study in Anthropology By Margaret Alice Murray, this ebook included TOC for Reader. This sample in ebook "It is impossible to understand the witch-cult without first understanding the position of the chief personage of that cult. He was known to the contemporary Christian judges and recorders as the Devil, and was called by them Satan, Lucifer, Beelzebub, the Foul Fiend, the Enemy of Salvation, and similar names appropriate to the Principle of Evil, the Devil of the Scriptures, with whom they identified him.

This was far from the view of the witches themselves. To them this so-called Devil was God, manifest and incarnate; they adored him on their knees, they addressed their prayers to him, they offered thanks to him as the giver of food and the necessities of life, they dedicated their children to him, and there are indications that, like many another god, he was sacrificed for the good of his people."

Enjoy this classic work today. These selected paragraphs distill the contents and give you a quick look inside The Witch-cult In Western Europe:

The admission ceremonies were often elaborate, and it is here that the changes in the religion are most clearly marked; certain ceremonies must have been introduced when another cult was superimposed and became paramount, such as the specific renunciation of a previous religion which was obligatory on all new candidates, and the payment to the member who brought a new recruit into the fold.

...No explanation is offered by the objectors as to how the Inquisitors arrived at the form of questionary, nor is any regard given to the injunction to all Inquisitors to acquaint themselves with all the details of any heresy which they were commissioned to root out; they were to obtain the information from those who would recant and use it against the accused; and to instruct other judges in the belief and ritual of the heresy, so that they also might recognize it and act accordingly.

...If, as happened among the East Saxons, the king forsook his old gods, returned to them again, and finally forsook them altogether, the tribe followed his lead, and, in public at least, worshipped Christ, Odin, or any other deity whom the king favoured for the moment; but there can be hardly any doubt that in private the mass of the people adhered to the old religion to which they were accustomed.

...We enjoin, that every priest zealously promote Christianity, and totally extinguish every heathenism; and forbid[23] well worshipings, and necromancies, and divinations, and enchantments, and man worshipings, and the vain practices which are carried on with various spells, and with frithsplots,[15] and with elders, and also with various other trees, and with stones, and with many various delusions, with which men do much of what they should not.-And we enjoin, that every Christian man zealously accustom his children to Christianity, and teach them the Paternoster and the Creed.

...It has come to our ears that numbers of both sexes do not avoid to have intercourse with demons, Incubi and Succubi; and that by their sorceries, and by their incantations, charms, and conjurations, they suffocate, extinguish, and cause to perish the births of women, the increase of animals, the corn of the ground, the grapes of the vineyard and the fruit of the trees, as well as men, women, flocks, herds, and other various kinds of animals, vines and apple trees, grass, corn and other fruits of the earth; making and procuring that men and women, flocks and herds and other animals shall suffer and be tormented both from within and without, so that men beget not, nor women conceive; and they impede the conjugal action of men and women.