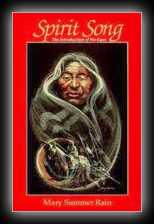 Spirit Song: The Introduction of No-Eyes
by Mary Summer Rain
1985

The first volume in a series of books written by Mary Summer Rain about her experiences with an extraordinary Native American shaman called "No-Eyes," Spirit Song has become one of the best-selling and most important books in the literature and philosophy of what has been called the "new-age."

Mary Summer Rain was the last student of the blind-from-birth Chippewa visionary, and spent many days in the remote cabin in the mountains with the woman who would become her beloved friend and teach her the many lessons of the spirit and of the Earth Mother. But it is the unique interaction between the two that provides the emotional power behind the profound teachings of the old woman. The wonderfully lyrical descriptions of the vivid seasonal beauty of Colorado serve as a backdrop for this unfolding narrative.